Liz Brooks (actually Liz Allen since 2005, although everybody still called her Liz Brooks!) died on October 28th 2015, at Gatwick, returning from a Company conference in Guernsey. She had been suffering from cancer for some years.

Liz had been an invaluable part of Enthusiast Holidays since its inception (as “the Magic of Steam in Poland”) in 1975, her fluent Polish being of particular benefit when leading or helping to lead our groups in those days when railway photography was frowned upon in most Communist countries, and Poland in particular.

Later she would be found in such diverse places as Cuba, Eritrea, East Germany, Turkey, India and Pakistan – almost always getting her way for the group, whether it be permission to photograph steam, or getting concessions in hotels.

A dyed-in-the-wool tour operator, and a senior executive of the Travel Corporation, a major international travel group comprising Trafalgar Tours, Insight, Uniworld Cruises, Red Carnation Hotels and many other brands, Liz became interested in steam in its own right, and even – to a lesser extent – buses, often accompanying Vic on the first Sunday in May rallies to Brighton, filming out of the back of their old camper van en route!  So it was fitting that many of the mourners at Liz’s funeral on November 23rd., were conveyed to the church and to the cemetery by specially chartered RT8.

Her passing will leave a large void in her professional and her private life, and the international gricing scene will be less colourful without her! 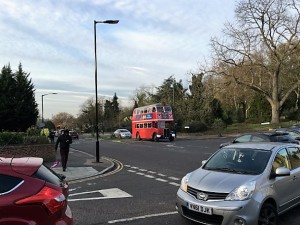