29 January 2010: in Serbia, the “01” 2-6-2 has been out of use since 2007, whilst the “33” 2-10-0 will cease at the end of July (presumably because of boiler certificate expiry). On the industrial scene, Kostolac and Vreoci have both ceased using steam, and the s.g. steam at Banovici is also out of use, leaving just a few locations where “62” 0-6-0T (USA) survive. In Slovenia, the “33” and “25” 2-8-0 are both operating, and encouragingly, the planned overhaul of the “06” 2-8-2 appears to be under way. Nonetheless it is impossible to operate a tour with as much content of genuine working steam as in 2007, and we are therefore reassessing the plans for a tour of former Jugoslavia. (information courtesy Zoran Veresic) 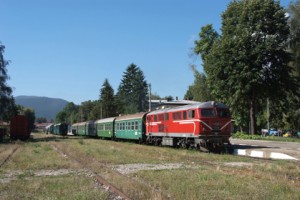 This tour will be largely a repeat of what we achieved in 2007, based on the fact that former Jugoslavia is the last country in Europe using steam locomotives in any numbers in a wide variety of industrial locations – we will concentrate upon those which are the best for photograhing steam in action, rather than hunting down rusting hulks! Click on this link for the provisional itinerary, which is (20 Jan.) almost complete. A 45min DVD or Blu ray (origination HD) of our 2007 tour is now available at £19.95 incl. VAT

Following the 100th anniversary of the Bohinj Railway, with Slovenian and hopefully Italian special trains – with ex-JZ “25” Class 2-8-0 (below) and the latter with Borsig “06” 2-8-2 (pictured just inside Austria in 1971) l the next day with the “06” or “25” (or the FS version, the “728”) and a visit to the Ljubljana railway museum; Bosnia for working “Kriegloks” and n.g. “83” 0-8-2’s in industrial sites, and Serbia for the spectacular Mokra Gora n.g. system also with”83″, other industrial locations with USA tanks, 900mm Davenport 0-8-0’s, Skodas and many more; a main line steam special on one of the scenic secondary lines, with the Serbian “01” 2-6-2 (below). As soon as the itinerary and price are established, you will be able to click on links for latest itinerary and a booking form, which will include a variety of travel options for getting there and back.